Queen of Pop Madonna is about to start working on a new album, right? The question on everyones mind remains: What will it sound like? When will it be released?
If you ask mommasboy (and you should), we don't know anything and have to assume it may take a bit for her to churn out a new record, BUT, we have a clear frontrunner for the position of upcoming producer - and, as many already know, without someone capable we will most likely get a lackluster record from the woman who was clearly destined to be our leader.
And that must be prevented. Failure, dear Madonna, is not an option.
Listen, while we enjoyed MDNA for a month or two, we clearly can't be bothered to listen to it again in the near future. That said, we remain optimistic and our faith in Madonna is indisputable.

Now, we are willing to help the Lady out and thump her nose in the right direction.
We said it before and we will say it again and again and again ...
Monsieur Adi has the chops and the talent to give Madge a new, mature, sophisticated, earthy and overall atmospheric sound. Much like Mr. Orbit has done before, we believe that Madonna and him could create some really great sounds.
On second thought: scratch that, as Mr. Orbit was present during the MDNA process and we all know how that turned out - mediocre at best. 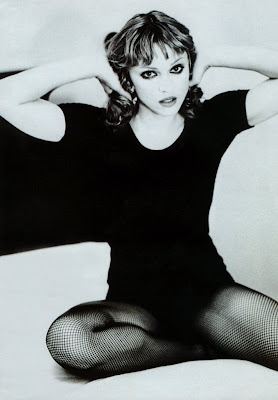 Where have the years gone?
Am I too old to be wearing leotards? Yes? No?

Btw, Fuck the haters we say. Madonna is not too old, too has-been, too granny or too anything to not be releasing kick-ass tunes.
She's Madonna, for fucks sake, Mother of God if you will.


Back to topic:
Monsieur Adi, a France based producer (big plus, as we recall Madonna loves the french) created the best reference e.g. musical business card ever. Unfortunately Ms. Ciccone seems to not take any notice since his finely crafted re-workings of her material have been floating around the web for nearly two years now. And we seem to get the feeling his interest in her is fading.
We don't know what else this guy has to do!
He has revamped a wide range of songs of some great (and some not-so-great) artists.
His own original tunes are brilliant as well.
So, Miss M, listen up and do not ignore our help again.
You should pick up a phone and call Monsieur Adi immediately! Do it now!!!!
Snatch him up before anyone else can, cause Lord knows, you ain't getting anyone more dynamic and inspirational than him and there is only so much you can get away with these days. Shitty music ain't one of those things.
Good music should be a top priority to you, just sayin' as a friend! And while we are at it, we love the gloves.

To get a better understanding what we are trying to sell here: just listen to his remix of 'Get Together' which is a truly fantastic original song to begin with.
Still, he totally revamped it and squeezed the almighty into it.
And while you are at it, go and support Monsieur Adi. Because he shall be the one to stand tall. Amen!